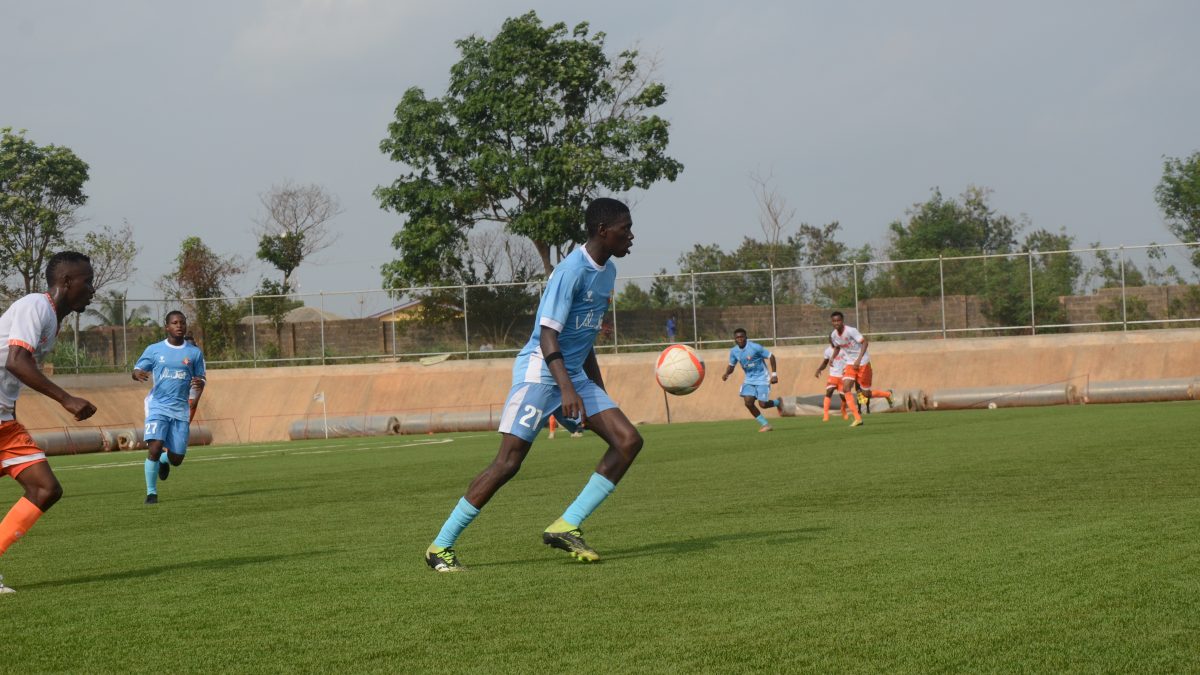 Akinsanmiro, Agbeko on target to give the Sky Blue Stars victory over Ibom Youth.

Remo Stars FC boosted their hopes of finishing on top of the NNL Group B2 table courtesy of a 3-0 win over Ibom Youth at Remo Stars Stadium this evening.

Daniel Ogunmodede’s side dominated the contest in Ikenne-Remo, Ogun State and scored three goals through two beautiful strikes from Akinsanmiro Ebenezer and a superb free kick from Agbeko Morgan to secure all three points.

The victory takes the Sky Blue Stars to 24points making them remain top on the table and also maintaining their hundred percent home record, while Ibom Youth FC are still on 18 points.

The Sky Blue Stars controlled the opening 45 minutes of football, with Ibom Youth spending long periods inside their own half; the best chance of the first period fell to Adah Mathias in the ninth minute, but he nodded it wide of the post after Ismail Sodiq had found him in a dangerous area.
A similar opportunity came for the host in the fifteenth minute after Adah Mathias located a free Akinsanmiro Ebenezer who dribbled his marker silly, he took his attempt at once but it went inches over that bar.

The breakthrough finally came for the host in the 21st minute through Akinsanmiro Ebenezer to get his debut goal for the club after slick passing from Ismail Sodiq and Dada Oladimeji, with a lethal finish from promoted lad from the academy of the club.

Fifteen minutes later, Akinsanmiro Ebenezer got his first brace for the Sky Blue Stars with another delicious strike after Ismail Sodiq’s cross reached the visitor’s goalkeeper, he punched it and Victor Collins head the ball towards a ready Akinsanmiro Ebenezer, he took from outside the box and it ended at the back of the net.

The visitors pushed hard to reduce the deficit in the early minutes of the second half but Bankole Kayode did well to deny them from pulling one back.
Agbeko Morgan continued his scoring form in the 54th minute with a curling free kick after Adah Mathias, Ogunribide Oluwaseun, Akinsanmiro Ebenezer and the aforementioned stood before the ball, he took at once and it went straight inside the net to give the host three goals advantage in the encounter.

Remo Stars had double attempts in quick succession with the visitor’s goalkeeper after he made two good saves to deny Dada Oladimeji and Victor Osuagwu.
At the tail end of ninety minutes, Abdulrasheed Awoyemi had a glorious chance to increase the goals of the Sky Blue Stars but his attempt went wide.

Remo Stars victory against Ibom Youth has made them remain on top of the Group B2 table and next for them is a trip to Akwa Ibom State to face FC One Rocket on Saturday.