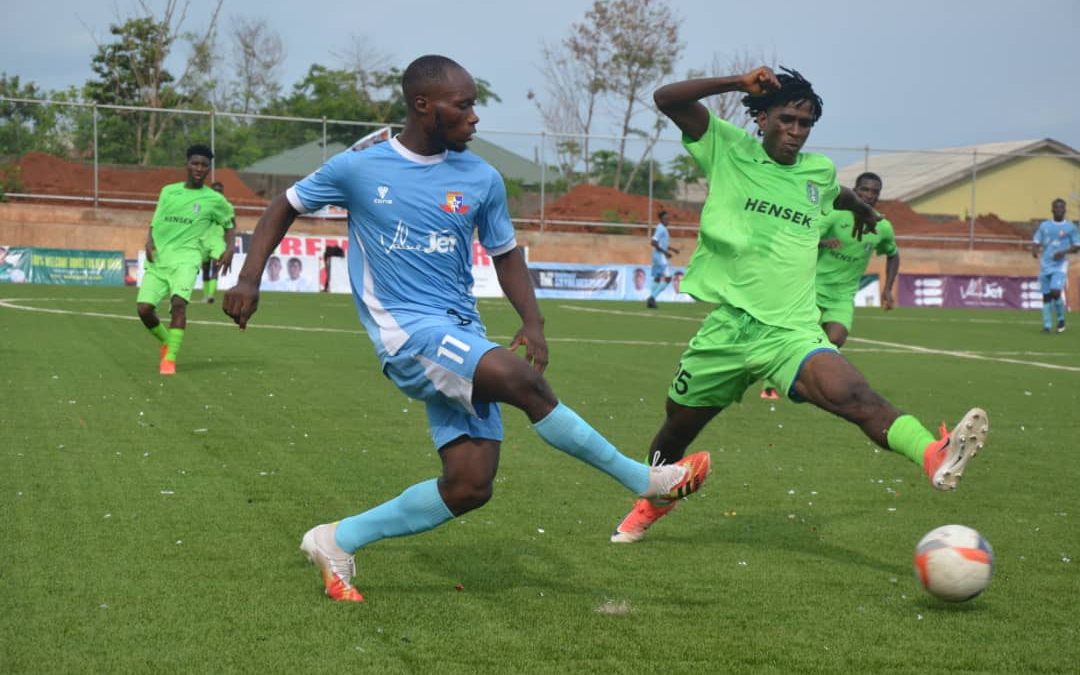 Both sides started brilliantly in the early minutes of the game as the sky blue stars came close to taking the lead in the 3rd minute after Ismail Sodiq found Agbeko Morgan who in turn sent in a cross as Adedayo Olamilekan failed in his attempt to convert.

What looked like the closest opportunity for the Sky Blue Stars came in the 5th minute after Ogunribide Oluwaseun took a short pass to Adedayo Olamilekan, he took the shot immediately before Abel Akah handled the ball inside the box.

Agbeko Morgan stepped up to take the spot kick, FC One Rocket goalie, Nwoko made a save off the kick as parried the ball towards Ogwuche Adah but his rebound strike went wide off the target.

The Sky Blue Stars continued to attack with pace and purpose and the pressure paid off in the 23rd minute, the referee spotted an infringement on Adedayo Olamilekan, Ismail Sodiq delivered a pinpoint cross as Agbeko Morgan rose highest to head the ball home as the stars got a deserved lead.

Bankole Kayode was called into action in the 36th minutes as a swift counter attack by FC One Rocket, Isreal.E curly strike was goal bound as Bankole produced a quick reflex save to ensure we keep the lead.

The Sky Blue Stars continued to press forward in a bid to increase the lead after Ogunribide Oluwaseun cross from a corner kick was flicked over by Adah Mathias and it fell towards Agbeko Morgan who took a shot after sighting Nwoko was out of his line but Etim Charles was quick to make a goal line clearance to maintain the scoreline.

Towards the end of the first half, Adah Mathias would have recorded his name in the scorers sheet but the woodwork denied his brilliant free kick.

The introduction of Dada Oladimeji and Nwala Ifeanyi brighten up the game with the former creating chances that could have gone in favour of the host. He dribbled two of his markers to shoot at goal but the visitor’s goalkeeper was calm enough to pull a save.

The visitors were presented with a couple of chances and continued to search for an equalizer but the lead ensured we keep things tight at the defense to secured maximum points.