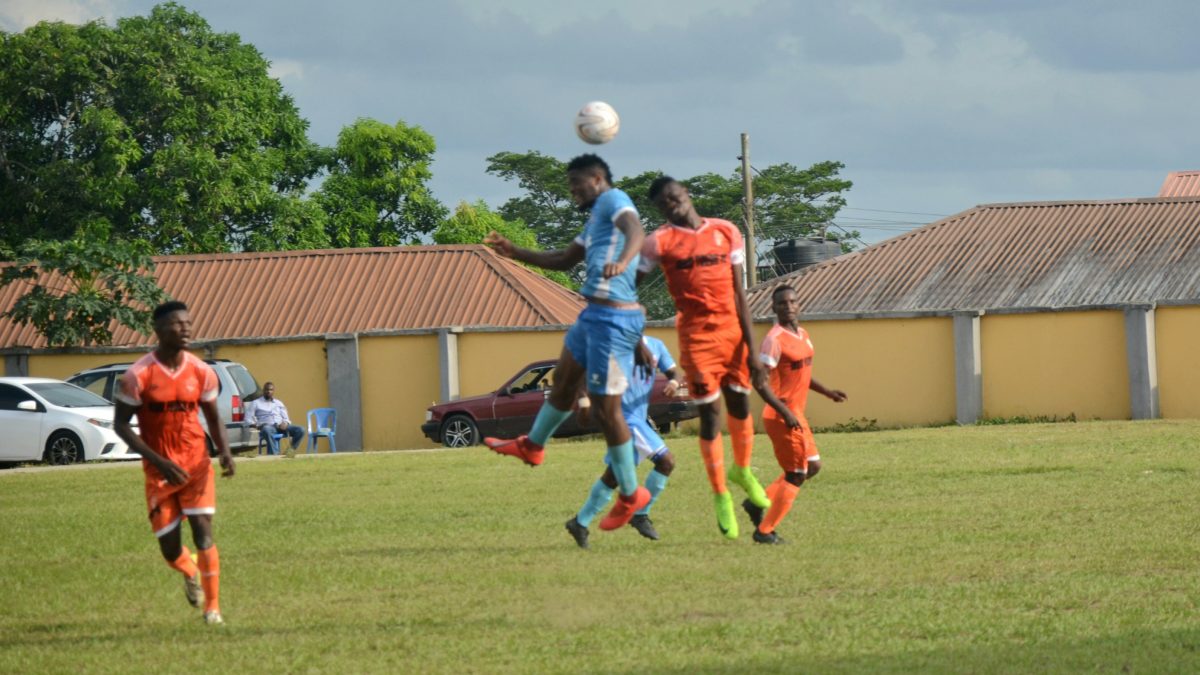 Adaa Nelli and Imei Ndon scored for the host in the 45th and 73rd minute respectively before substitute Oyedele Adebayo pulled one back in the 90th minute of the game.

Daniel Ogunmodede made five (5) changes to the starting line up that got maximum points for his side against FC One Rocket last weekend as Collins Victor, Ifeanyi Nwala and Ariyo Temitope were called upon to replace injured Agbeko Morgan, Ibrahim Yusuf and Balogun Abiodun while Arinze Oyota and Okanlawon Temidayo started from the bench.

Both sides started slowly and gradually built momentum into the game. The Sky Blue Stars came close in the 27th minute after Ogunribide Oluwaseun and Adedayo Olamilekan exchanged a one-two pass, the former tried to locate Adah Mathias but Adrian Eddidion nodded off to stop the visitor’s attack.

The host got a free kick close to the visitor’s final third, Nicolas Joseph took the kick and Ismail Sodiq nodded off to avert the danger for his side.
Ibom Youth FC continued to push for the lead, they got favoured when the referee pointed to the spot after he claimed there was a foul after Kingsley Odom took a shot that met Adedayo Olamilekan inside the box. Adaa Nelli stepped to take it and he directed his spot kick to the bottom left corner to give the host the lead.

The Sky Blue Stars came closer to get an equaliser in the opening minutes of the second half after Nduka Junior sent a low pass to Ogunribide Oluwaseun who in turn squared to Adedayo Olamilekan, he took at once but his attempt was blocked.

Erikan Dominic tried to double the lead for the host after he found space upfront but his attempt was parried by Bankole Kayode to maintain the scoreline.

Imeh Ndon doubled the lead for the host after he sighted the Sky Blue Stars goalkeeper out of his line, he took at once and Bankole Kayode couldn’t stop the goal.

Bankole Kayode went on to face more pressure as he denied a couple of chances from the host to get more goals in the game.
The visitors continued to push for a goal and it yielded profit after substitute Oyedele Adebayo tapped in Ismail Sodiq’s cross to reduce the deficit for the Sky Blue Stars on the dot of 90 minutes.