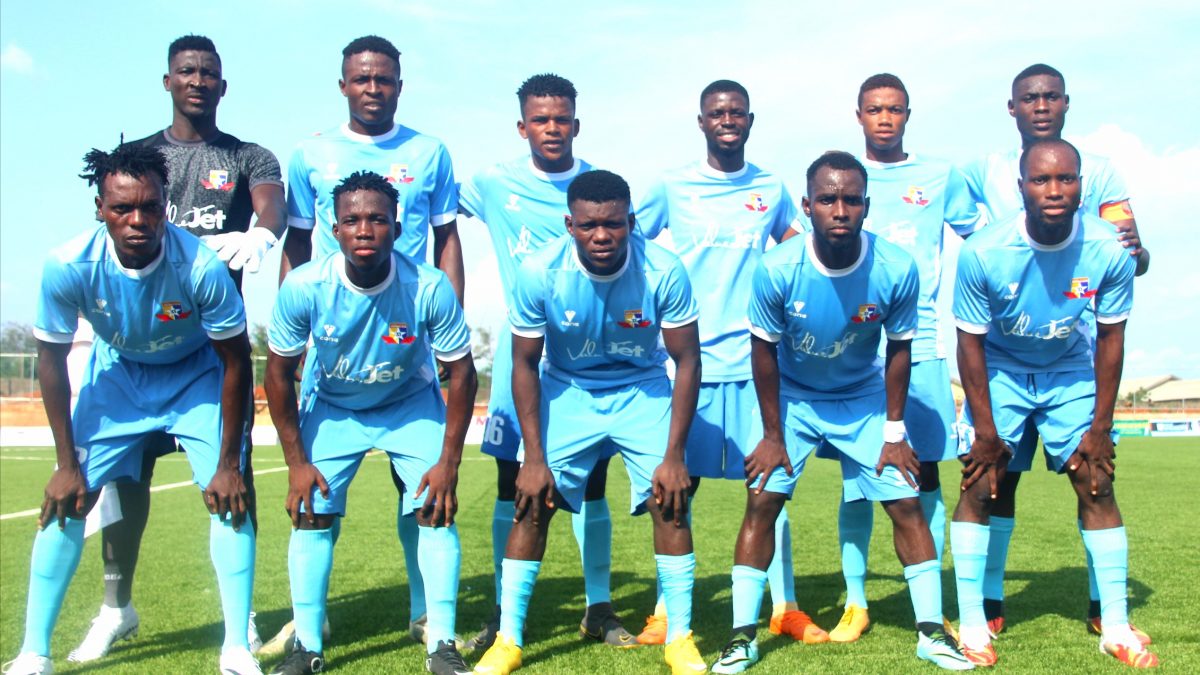 Head Coach, Daniel Ogunmodede made five changes to the side that lost 2-1 against Ibom Youth FC in Akwa Ibom. Agbeko Morgan, Akinsanmiro Ebenezer, Wisdom Samuel, Dada Oladimeji and Victor Osuagwu were called upon to be part of the game.

Both sides started brightly and it was the Sky Blue Stars that got the first attempt when Nduka Junior located Oyedele Adebayo who tried to get the ball at the back of the net but Njoku Ochenna cleared at sight.

Akanni Qudus with a brilliant run found Oyedele Adebayo on the left, he took the shot immediately but the visitor’s goalkeeper, Israel Kologwu parried and the referee sounded his whistle to indicate he was in an offside position.

The visitor came closer to get a goal after Njoku Ochenna found his way the final third of the host, he tried to square the ball towards James Collins and Bankole Kayode calmly intercepted.

The Sky Blue Stars were given a chance to go ahead from the spot after Oyedele Adebayo was infringed inside the visitor’s box, Agbeko Morgan took the kick and it went wide.

The host continued to find a goal, Agbeko Morgan got a beautiful pass from Akanni Qudus, he took anxiously and his attempt hit the side net.

Towards the end of the first half, the visitors through Uthuko Egbo and John Collins combined well to get the lead but Bankole Kayode rushed out of his box to intercept an attempt from John Collins.

The Sky Blue Stars had two beautiful attempts in the closing minutes through Agbeko Morgan but Israel Kologwu saved and immediately Agbeko Morgan got the ball to locate Akinsanmiro Ebenezer, but he couldn’t get to the ball early enough.

The second half started from where the host stopped with Agbeko Morgan getting another chance to give his side the lead but Israel Kologwu was brilliant enough to stop him yet again.

The host kept on knocking to get a goal after Akinsanmiro Ebenezer sent a thorough pass towards Agbeko Morgan, he swiftly dribbled Okoro Paul to shoot but it went over the bar.

Substitute Dada Oladimeji picked the ball from his half to find space upfront to locate Adah Mathias who immediately sent a pass to Akinsanmiro Ebenezer, he took anxiously and it went over the bar.

The goal finally came in the 75th minute after Adah Mathias found his way into the final third of the visitors, he took but the woodwork denied his chance and Morgan Agbeko calmly located Akinsanmiro Ebenezer who then put the host ahead from close range.

Agbeko Morgan doubled the lead for the Sky Blue Stars Adah Mathias beautifully squared in a pass, and he was there to make it count for his side.

The host continued to push to get their third of the day after Dada Oladimeji raced with the ball towards the corner flank, he sent in a beautiful cross but Adah Mathias wasn’t there to put the ball at the back of the net.

In the closing minutes the Sky Blue Stars got their third goal after Aneka Bless located a free Victor Osuagwu who sent towards immediately to Dada Oladimeji to score but the referee ruled it offside.

Up next for the Sky Blue Stars is an away trip to Otujeremi Ughelli Stadium to face J. Atete on Saturday in one of match day 18 fixtures.