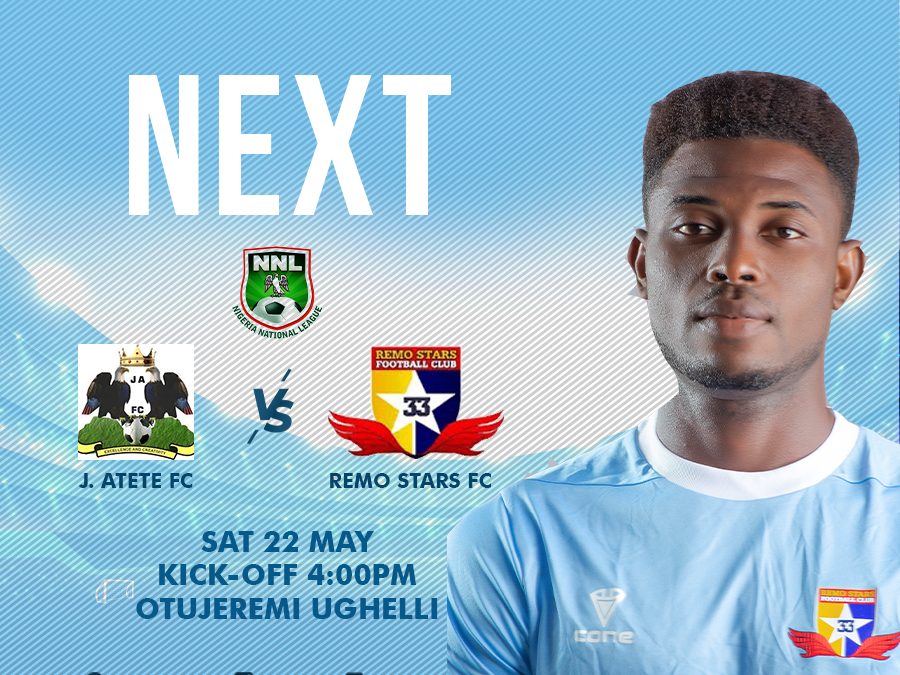 its a trip down to Otujeremi Ughelli Stadium, Delta State as we face J. Atete FC on Saturday in Matchday eighteen (18) fixture of the B2 Southern conference in the ongoing Nigeria National League (NNL).

The Sky Blue Stars defeated Apex Krane 2-0 at the Remo Stars Stadium on Wednesday thanks to two second half goals from Akinsanmiro Ebenezer and Agbeko Morgan on matchday 17. The win ensured that the Stars maintained their top spot position on the NNL Group B2 table after gathering 30 points from 15 games while J. Atete FC are 7th on the table with 23points from 16 games played.

J. Atete will be smarting from the 1-0 loss to Ibom Youth FC at the Ikot Ekpene Stadium, Akwa Ibom State in Matchday 17 of the Nigeria National League and will be going all out to ensure they get maximum points in this encounter.

In the reverse fixture, Agbeko Morgan tapped in Adah Mathias’s cross to secure all three points when they played at the Remo Stars Stadium in Ikenne-Remo, Ogun State.

J. Atete Goalkeeper, Joke Efoweho is one of their best players with good reflexes, good kicking and good movements. He had a decent game against the Sky Blue Stars when they first met at the Remo Stars Stadium ensuring his side was in the game.

J. Atete FC remain unbeaten on home soil having won the last six games a home, scoring 13 goals and conceding 4 goals a run the Sky Blue Stars will be determined to put an end.

Agbeko Morgan has been brilliant for the Stars this season scoring 8 goals, the young lad has been in fine form so far. Dada Oladiimeji, Victor Osuagwu, Adah Mathias and Oyedele Adebayo have also been instrumental going forward ensuring the goals are delivered.

A win for the Sky Blue Stars will see them maintain the top spot with 33points as the quest for the playoff stage into gaining promotion to the elite league, the Nigeria Professional Football League.