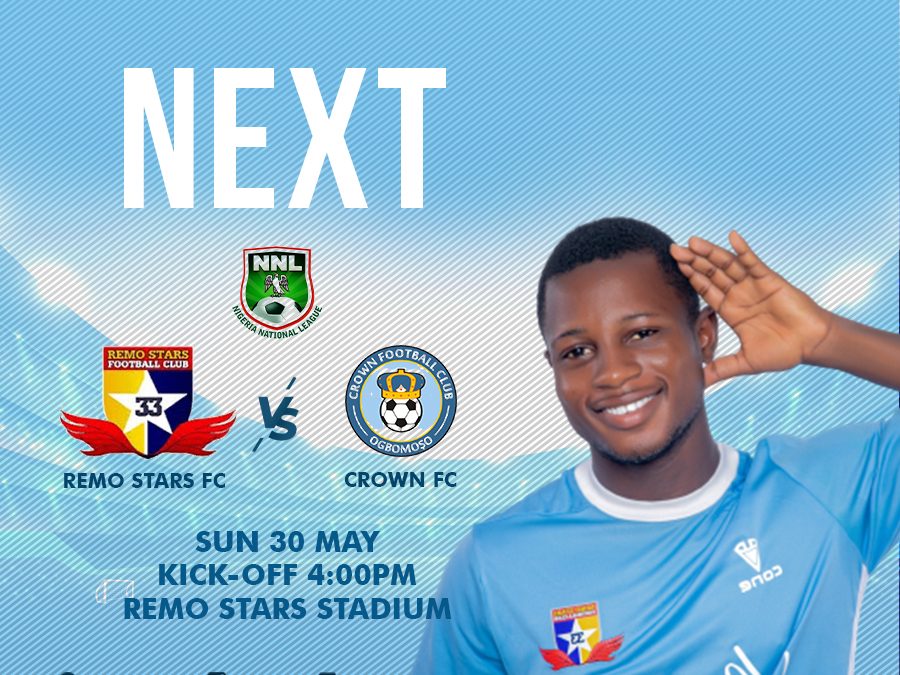 Upon us this weekend is the Southwestern derby, the bragging rights of the best team in the Southwest area in the country and has been keenly contested over the years.

Another derby day is here again with a lot at stake, which is just more than the bragging rights for the Sky Blue Stars as we welcome Crown FC to Remo Stars Stadium on Sunday’s Southwest derby in match-day nineteen of the NNL.

The Sky Blue Stars will hope to return to winning ways after their disappointing loss to J. Atete FC and will also want to maintain their 100% home record in the ongoing Nigeria National League season this weekend.

The visitors are 4th on the Group B2 NNL table after their weekend win with 27 points from seventeen games played, while Remo Stars have 30 points from sixteen games.

Crown FC defeated Remo Stars 1-0 on the 20th of March at Lautech Sports Complex, Ogbomosho when defender, Taiwo Abdulrafiu gave the Ajilete Boys the needed victory from the edge of the box to secure maximum points against the Sky blue stars.

Crown FC attacking midfielder, Adeyi Tobi who is currently their club’s highest goalscorer this season with 5goals recorded to his name has been influential for Ajilete boys going forward.

Remo Stars defenders have a lot to do in this game as they hope to stop the Ajilete Boys from getting goals, they have scored 6goals away from home and have picked 2points on the road against Joy Cometh FC and Apex Krane FC.

The last time the Ajilete Boys traveled to face the Remo Stars was in 2018 in a five goals thriller with the Sky Blue Stars coming from 2 goals down to defeat Crown FC 3-2 at the Gateway Stadium, Sagamu.

A win for Remo Stars will see them maintain the top spot with 33points as the pursuit for the elite division remains paramount for the Sky Blue Stars.