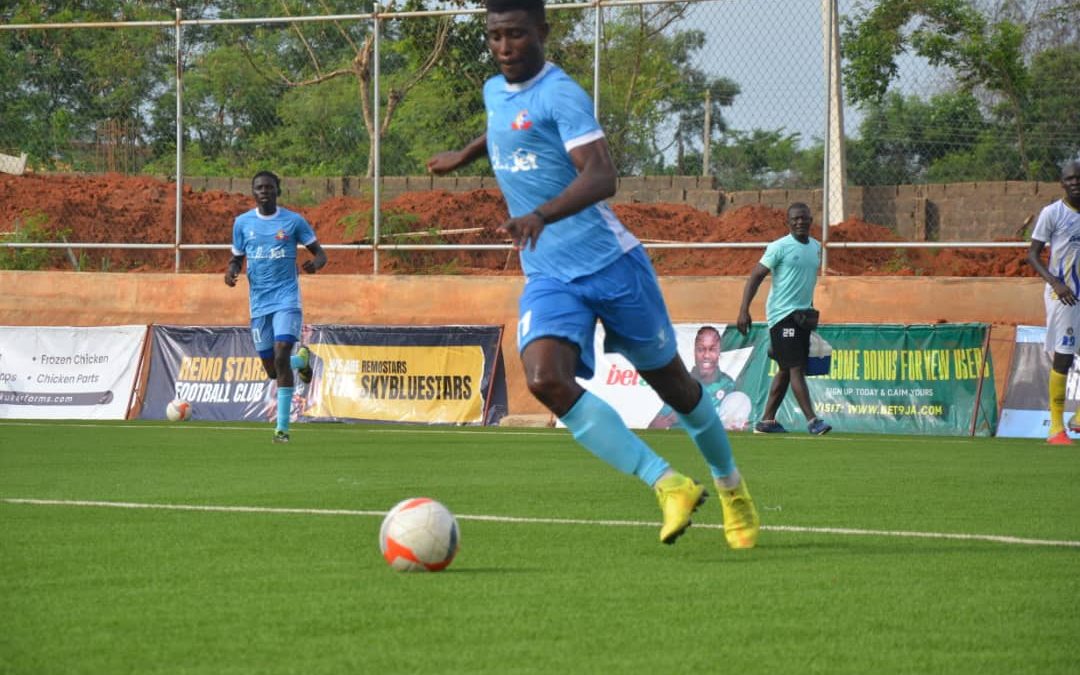 Remo Stars return to winning ways with a 2-0 victory over Crown FC at the Remo Stars Stadium in match-day nineteen of the Nigeria National League.

It was a brilliant start for both side in the game as the visitors got the first chance of the game in the opening minutes after Tobi Adeyi almost got his side the lead from a narrow and tight angle but Nduka Junior was quick to clear off immediately.
The Sky Blue Stars responded immediately with an attempt from Adedayo Olamilekan but his opportunity went directly into the hands of Belema Mamadu.

The Ajilete Boys got another attempt after Victor Collins’ weak pass was intercepted by Erasmus Aboh and he failed to capitalize of the chance as he guilty of making a decision which led to Ogunribide recovering well.

Nduka Junior sent a long pass to Wisdom Samuel, he found his way past Crown FC defenders but his strike forces Belema Mamadu into making a brilliant save.
Ariyo Temitope was presented with a couple of chance but his composure in front of goal was not too good as he could not make the chances count.
At the end of the first 45 minutes, Crown FC were close to taking the lead through Tobi Adeyi after he brilliantly received a low pass from Erasmus Aboh but Ogunribide Oluwaseun was there at the right time to deny them.

The host continued to mount pressure on the visitors after Adah Mathias was fouled just at the edge of the box, Nduka Junior lays a dummy pass to Ogunribide Oluwaseun who’s cross located Ibrahim Yusuf but his header went wide.

The breakthrough finally came in the 62nd minute after Ebenezer Akinsamiro won a free kick just at the edge of the box, Victor Collins lays it off for Ogunribide Oluwaseun who connected brilliantly with venomous shot and found the back of the net.


Remo Stars continued to find space upfront to increase their tally and Victor Collins got an opportunity to double the lead for the host after he connected well to Ogunribide Oluwaseun’s cross but his header went inches wide.

The Sky Blue Stars doubled their lead after Adedayo Olamilekan brilliant run unto the box at the far post saw him calmly tapped in Ogunribide Oluwaseun’s cross from close range to get his first goal in the Nigeria National League.